The Pros and Cons of White and Red Meat 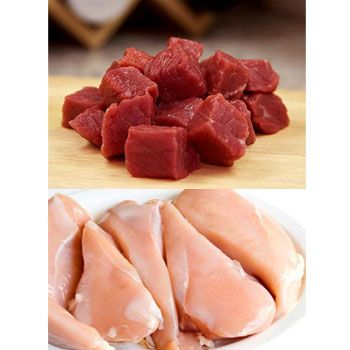 In nutritional science the distinguishing feature between white and red meat is myoglobin which is a protein that gives red meat such as beef its dark color. Most people though differentiate the two types on the basis of the taste that they develop. As a major proportion of people prefer white or red meat on the basis of taste many others like to differentiate the two on the basis of health benefits. Due to presence or absence of the protein Myoglobin the nature of the types of meat is not only distinguished, but they also have a set of different pros and cons.


The following are some of the pros and cons of white and red meat:

If you love white meat than there’s absolutely no harm in it as there are numerous pros when it comes to regular white meat consumption. On the other hand you have to lower down your consumption of beef!

Fish is another type of white meat that is popular among people for the obvious reasons it has low calories and tastes so good! But yes, it has some disadvantages for the human body as well. Some fishes contain higher amounts of mercury which can essentially be dangerous for the nervous system of the consumer. Hence it is strongly recommended that pregnant women and young children should consume fish with extreme precaution.

It can be clearly seen that there are distinct benefits and potential harmful characteristics of white and red meat but this doesn’t mean that a certain type of meat should be avoided. What’s important is to have a combination of both the two meats as great dietary benefits can be achieved this way.